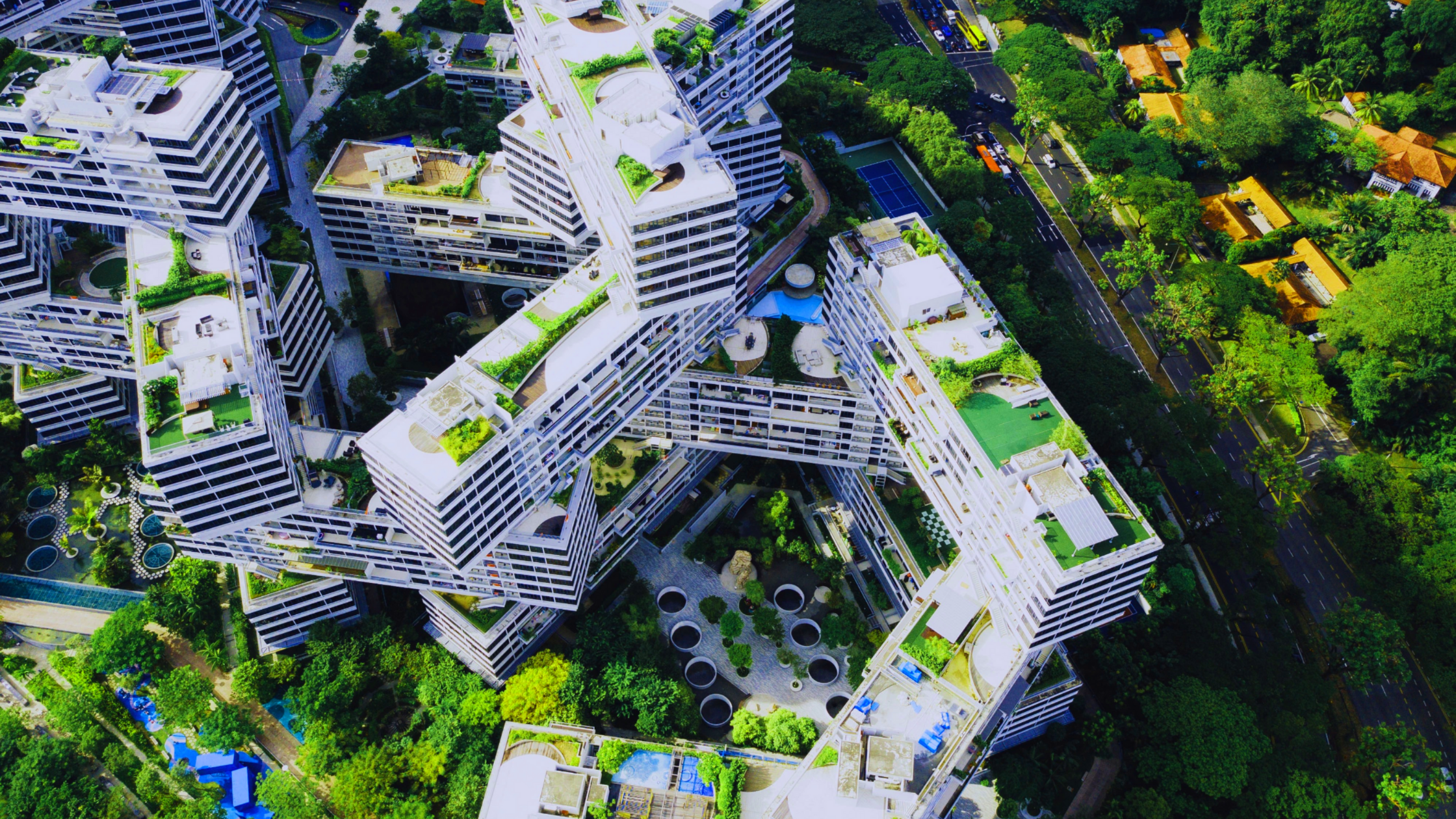 How to mitigate population growth in urban areas

Urbanisation is today’s dominant trend across our 21st-century changing world. Urbanisation occurs when the proportion of people living in towns and cities increases. Urbanisation occurs because people move from rural areas to urban areas. While urbanisation brings population density and new ways of ensuring growth, it also brings new sets of major challenges.

Throw in the impact of the pandemic, and now we need a whole new set of assumptions when it comes to population growth and the design of towns and large cities. Many cities offer an innovative – or ‘smart’ – approach to ensuring city resilience and technology has a big part to play in this too.

Let’s explore the evolution of urban cities. Nearly 15 years ago, we broke an urbanisation world record. In 2008, for the first time in history, half of the world’s population, or 3.3 billion people, lived in urban areas.

Today, 56% of the world population now lives in cities. The biggest change has been in Latin America and the Caribbean, with 81.2% of the population living in urban areas, up from 41.3% in 1950. Still, one-third of the worldwide urban population – or 1 billion people – currently live in slums.

Of course, population shift creates risk in urban areas by increasing population numbers. Population shift also generates more significant pressure and results in greater exposure to hazards. But the inherent vulnerability here is maximized because of poor actions and decision making. Without risk mitigation techniques, urban disasters are more likely to arise and bring disastrous consequences, this means that when it comes to risks linked to growing cities, urban risks create heightened interest. As we operate in transitioning economies, the situation now is how to understand the challenges and opportunities urbanization brings and ways for us to mitigate the urban risks that come with it. 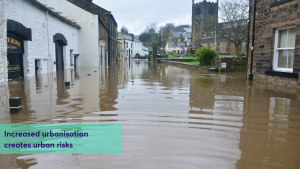 The 7 effects of urbanisation

Urbanisation doesn’t mean bad. It provides significant advantages on economic, cultural and social progress combined with conditions of modernity to motivate many people from the countryside towards the urban regions. A city is well managed, allowing economies of scale and network effects whilst lowering climate impacts on transportation.

Waste: The current practices of the uncontrolled dumping of waste on the outskirts of towns and cities have created a serious environmental and public health problem. Urban populations consume much more food, energy, and durable goods than rural populations resulting in health hazards and urban environmental degradation.

Water pollution: degrades water quality through three primary mechanisms 1) the discharge of pollutants at point sources and mobilisation of pollutants from diffuse sources, 2) flow alteration and 3) changes to the temperature of receiving watercourses.

Deforestation: When people from rural villages move to cities, they tend to use more resources since their incomes and rates of consumption are generally higher. As populations migrate to cities, new residential buildings need to be erected. Cities are often built and expanded into forest areas resulting in deforestation.

Flooding: Urbanisation reduces the ability of lands to absorb rainfall through the introduction of hard, impermeable surfaces. 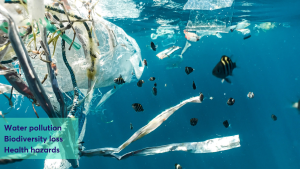 The problem with urbanisation is urban risks

Urbanisation increases the exposure of people and economic assets to hazards and creates new patterns of risk, making the management of disasters in urban centres particularly complex.

Urban disasters carry their unique characteristics. They are directly linked to different social, political, economic, and environmental elements combined together. That’s why a disaster in one place will likely have a different outcome from a similar catastrophe elsewhere. Think in those cases about vulnerability and exposure to location-related hazards; and increased vulnerability due to poor local governance, environmental degradation, and the shortage and the overstretched of resources.

Urban disasters are nothing new. What is new is their growing scale.

What we have certainly seen:

Transitioning businesses realize that they must put more attention on urban risks and the drivers of risk: Urbanisation.  Only then can cities and economies become more resilient.

Since the dawn of the industrial revolution, we’ve been talking about the concept of urbanisation. individuals head to where economies are thriving to build better lifestyles for themselves and their families. The latter however has enabled many of us to overlook how different modern urbanization is in terms of the sheer scale and demographics (geographical locations and ageing populations).

The reason for urbanisation hasn’t fundamentally changed: people still move to cities because they hope to find better opportunities.

However, environmental and climate change reasons are increasingly pushing populations into cities. For example, in Western Asia, droughts led to crop failures and water shortages, leading to migration to cities.

In their report Understanding the nature and scale of urban risk in low- and middle-income countries and its implications for humanitarian preparedness, planning, and response, the International Institute for Environment and Development states:

“Most of the world’s urban population and its largest cities lie outside the most prosperous nations, and almost all future growth in the world’s urban population is projected to be in low- and middle-income countries. It is common for up to 50% of the population to live in informal settlements within these urban centres. These are often located on land that is exposed to hazards, with poor-quality provision for water, sanitation, drainage, infrastructure, healthcare, and emergency services.”

To paint this picture further, in Asia, an additional 120,000 people join urban areas every day. That requires more than 20,000 new dwellings, 250 kilometres of new roads, and the infrastructure to supply over six million litres of drinkable water.

It’s an inherently dangerous situation. We only need to look at the air pollution problems in cities like Jakarta or Delhi, the wildfires in California, or the difficulty managing a pandemic in crowded areas, to see that urbanisation has its own inherent risk. These areas aren’t usually disaster-prone by nature. Instead, it is urbanisation that brings the risks to fruition.

So what’s going on, and what do we need to do about it? We will come onto this, but first, we need to understand why urbanisation is increasing to the degree of knowing how to address the risks it brings.

Throughout human history, people have been attracted to cities as centres of culture, learning, and economic opportunity. But urbanization also has costs, especially when it happens rapidly.

By nature, extensive urbanization is not inherently disaster-prone. Still, people, poverty and man-made disasters are concentrated in cities as the absolute volume of people living in urban areas increases.

The growing rate of urbanization and the increase in population density can lead to the creation of risk, especially when urbanization is fast, poorly planned and occurring in a context of widespread poverty. UNDRR

What makes urban areas ripe for the development of disaster are socio-economic frameworks is the heightened need to assess, mitigate and monitor the exposure and vulnerability to disaster risks. A lack of appropriate infrastructure can result in worse outcomes when hazards are encountered. As noted previously, this driver of urban risk is caused by poor local governance, environmental degradation, and limited resources.

How can we reduce urban risks and build more resilient smart cities?

Whether one thinks about Italy, France, Germany, Spain, or the UK, all European markets are aiming to shape more resilient and sustainable paths to the future.

So European market players will look for initiatives that can help countries and companies to:

Why are smart cities paving the way to urban risk mitigation solutions?

The picture thus far is rather doom and gloom. However, our cities have also been morphing differently alongside increasing urbanization, opening up possibilities for more significant risk mitigation. Increasingly, our cities are becoming smart cities, with interconnected local infrastructure, logistics, utilities, and more.

Through the power of data, the smart city model can both predict and influence behaviour which, in turn, can be used to mitigate urban risk with the right approach. Imagine how remarkable it could be if the data available within a smart city were used to better plan and use land. Combined with the Internet of Things sensors and artificial intelligence algorithms this is possible.

With the concept of Environmental, Social, and Corporate Governance (ESG), which is becoming a priority for cities worldwide, cities can be transformed in ways to enable urbanization activities that are safer, possible, and more reliable and therefore reducing urban risk. In essence, urbanization can become more sustainable, which is, after all, precisely the focus of ESG in the first place.

Interestingly, it is startups, innovations and disruptors that are driving changes and building smarter cities. It’s them that are coming up with solutions to the problems of urbanization, ranging from traffic management through to sensors managed cities and water supply management.

CleanTech as an emerging sector is expanding at speed with 1,000 ventures having raised billions of dollars.

Our team at Alchemy Crew estimates that UrbanTech startups include approximately 2,000 different ventures. Seven hundred of these have received an estimated $10+ billion investment.

Some examples of high growth markets include: 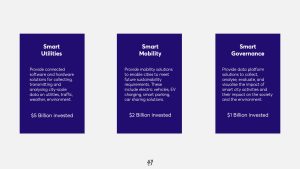 There has been $5 billion of investment in companies providing utility solutions. These include ventures such as Landis and Gyr in energy management through smart meters as a service, flood mapping, risk analytics and pricing exposure management solutions covering the entire planet Fathom Global, and provider of on-Demand access to public transportation to optimise greener, affordable and happier movement within cities Swat mobility.

From the image, they can:

Of course, where there is a risk, we need to work harder and faster to mitigate that risk, and the insurance industry has a vital role to play here. And many insurers are rising to the challenge.

In partnership with the CityMakers program, AXA focused on a smart city mobility planning initiative for the City of Paris. AXA has invested in startups, such as one that offers favourable finance and insurance options for new vehicles that owners are willing to put on a car-sharing platform. Startups include a peer-to-peer car-sharing marketplace for renting cars OuiCar, real-time location-specific smart city platform GEO4CAST and intracity carpooling services to work, Karos.

SwissRe Institute’s Quantum Cities is an excellent example of how insurers can partner with others to effect positive change in the arena of urban risk. The initiative explores the risks of interconnected systems and guides both businesses and governments as they look to solve the critical challenges of our modern cities. The institute produces insights to guide companies and governments to develop effective resilience solutions to make cities more liveable. This effort is part of the Swiss Re Institute exploratory research portfolio. In this context, Swiss Re Institute is facilitating Public-Private Research Partnerships (e.g., PPRPs) to solve key challenges and risks society faces, including:

Transitioning to a better urban world rightly forces our attention and efforts towards different and consistent sustainable approaches to mitigate existing and future urban problems. Urban risk is a reality of the modern world. Our goal is to support insurers and growth ventures to identify, validate and commercialise innovations to solve the issues of urbanization so that disasters are avoided and our cities become genuinely more liveable.

Exclusive insights from the Crew